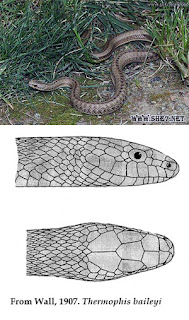 Frank Wall entered the Indian Medical Service in 1893 and spent most of the next 33 years as a British Medical Officer in the Indian Empire, being stationed in Ceylon, Burma, and peninsular India. In the First World War he joined an expeditionary force in Iraq and also served in France. Wall was interested in all aspects of snakes, and he wrote about 215 titles between 1898 and 1928. As he traveled, he obtained specimens from others, sometimes paying local people small sums for specimens, encouraging them to collect. In 1907, Wall described Natrix baileyi on the basis of two specimens he obtained from Lieutenant F. M. Bailey. The only locality data Wall provided in the original description was that the snakes came from Tibet and were collected at about 14,000 feet elevation. The specimens were given to the British Museum of Natural History, with a note saying they came from “above Gyantze, at 14,000 feet altitude.”  Wall reported that the specimens were found "in the sides of a hot spring, and are never found as far as half a mile distant… they are reported not to enter the water, and can be obtained in winter and summer alike." One female (903 mm) contained six eggs. Edward Malnate moved Natrix baileyi to the new genus Thermophis when he examined the snake’s anatomy and found it quite distinct from other snakes in the genus Natrix. Guo et al. (2008) described a second species of Thermophis, T. zhaoermii. Both species are endemic to the Qinghai-Xizang Plateau, with Thermophis baileyi on western side of Mt. Hengduan, while T. zhaoermii inhabits its eastern side. Both species occur at relatively high elevations (about 4350 m). Thus, Thermophis may reach the highest altitude of any snakes and undoubtedly holds the altitude record for Asian snakes.

Huang et al. (2009) conducted a phylogenetic analysis to identify the closest related living relative of the Hot Spring snakes using mitochondrial DNA sequences from eight specimens, together with sequences from 95 additional caenophidian and five henophidian genera that were obtained from GenBank. Results showed the hot-spring snakes, species adapted to high, cold environments, clustered in the monophyletic, New World Xenodontinae (now in the family Dipsadidae). Their data failed to provide any evidence that the New World xenodontines diverged from Thermophis and dispersed into the New World, and also failed to suggest a colonization of Asia by New World xenodontines by dispersal from the New World. But perhaps more importantly than shedding light on the ancient relationships of this snake, Huang et al. (2009) also showed the divergence of the two species in Thermophis was caused by the barrier formed by the Hengduan Mountains, and that speciation had almost occurred when Tibetan Plateau attained present elevation.

Using both mtDNA and a nuclear gene, He et al. (2009) suggested again that  Thermophis does appear to be a member of the Western Hemisphere Xenodontinae, And their molecular data also indicate a large genetic distance between T. baileyi and T. zhaoermii, which strengthened the validity of the recently described, T. zhaoermii. In a more recent paper, He et al. (2010) used the complete mitochondrial genome sequence of the Sichuan hot-spring keel-back (Thermophis zhaoermii), and recovered Thermophis as a Colubridae and the sister to the Colubrinae. In an early on-line view Pyron et al. (2010) recovered Thermophis as the sister taxon to the colubrid pseudoxenodontinae genera Plagiopholis and Pseudoxenodon, (both South and Southeast Asian high elevation snakes, (being found up to 1300 m and 2000 m respectively - not nearly as high as Thermophis) and they consider Thermophis to be part of Pseudoxenodontinae.Geographically, this is a much more satisfactory relationship.

What is missing here is the natural history of Thermophis. We think it lays eggs - but might Wall have only seen un-shelled, ovarian or oviducal eggs?  Its diet, habitat use, and thermal ecology are unknown. Wall's comment that it can be found year round  (at at 14,000 ft - more than 4000 m) and that it never wanders far from hot springs is tantalizing. Is Thermophis able to survive the cold temperatures of winter at high altitudes  because of the geothermal energy in its environment? Could the two species of Thermophis be the first known snakes to rely not on solar power, but on geothermal energy, for regulating  body temperature?

This is not as farfetched as it may seem. Recently Loval et al. (2010) described an aquatic moss (Fontinalis) colony closely associated with vent emissions at the bottom of Yellowstone Lake that considerably exceeded known temperature maxima for this plant. The moss was colonized by animals, including crustaceans (Hyalella and Gammarus), a segmented worm in the Lumbriculidae family, and a flatworm tentatively identified as Polycelis. The presence of these invertebrates suggest a highly localized food chain derived from the presence of geothermal energy and that support significant biodiversity.