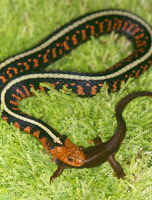 Utah State University biologists have long studied varied species of North American garter snakes that have evolved an amazing resistance to a deadly neurotoxin found in innocuous-looking newts, a favorite food of the snakes.

The researchers have now discovered that snakes of different types in Central and South America and Asia have evolved the same resistance in a strikingly similar way.

“We were able to break down the genetic basis of the adaptations in each of these snakes,” says Feldman, lead author and a recipient of USU’s Robins Award as 2006 Graduate Research Assistant of the Year. “We found that each snake – ranging from the Neotropical ground snake of Central and South America to the tiger keelback of East Asia – has evolved in almost the exact same way as the garter snakes at the genetic level.”

Each of the snakes feasts on amphibians that secrete tetrodotoxin or TTX, a poison far deadlier than cyanide. It’s the same neurotoxin found in puffer fish which, prepared by rigorously trained chefs, provides sushi lovers with an exhilarating, albeit risky, dining experience. Tetrodotoxin is also an alleged ingredient of so-called zombie powder, an anesthetic-like concoction that causes humans to initially appear dead and regain a temporary semi-conscious state.

“Tetrodotoxin affects proteins that control nerve impulses and the ability of muscles to fire,” Feldman says. “At full strength, the poison instantly paralyzes nervous and muscle tissue in animals – including humans – resulting in rapid death.”

The snakes in the team’s study, however, have mutations that thwart the toxin at the protein level, preventing TTX from blocking the sodium channels in muscle.

“This tells us a couple of things: either these mutations are the perfect solution to avoid the poison or may be the only way to bypass the problem,” Feldman says.

What could limit the range of solutions, Brodie, Jr. says, is the ‘cost’ of the mutation.

“We know that the mutation affects the snakes’ speed,” he says. “Snakes with the mutation are slower. A different mutation to block the toxin could have even greater detrimental effects and that could explain why the current set of mutations is so similar across all species.”

In continued study, the team is investigating Caddisfly larvae, creatures very different from snakes, that appear to have developed a similar resistance to tetrodotoxin. In a naturally protective foil, female newts lay eggs laced with – you guessed it – TTX. Most pond predators that ingest the amphibian caviar do so at their peril. Caddisfly larvae are an exception.

“We’re studying these larvae to see if they’ve adapted with mutations similar to those of the snakes,” Brodie, Jr. says.
Email Post
Labels: Thamnophis Trachia TTX