The Bockadams of the genus Cerberus

Thinking about herpetological field work in Thailand brings back a lot of memories. One of the most vivid is arriving at small village on the Gulf of Thailand side of the peninsula and being greeted by two local men with burlap bags filled with snakes, they had more than 50 snakes in the genus Cerberus. When we asked them how they collected them, they explained they gathered them from the mud flat by scooting around on a board and picking them up. We then inquired how long it took to collect the snakes, and they replied, “about half an hour.”

The evidence now suggests that snakes in the genus Cerberus may be the most abundant aquatic snakes on the planet. They have an unusual coastal distribution that extends from the vicinity of Mumbai, India to Paula, Micronesia a distance equal to about 20% of the Earth’s circumference. 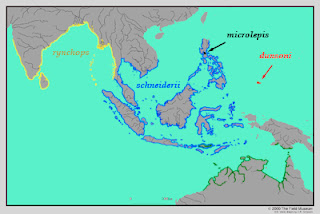 The scientific community first became aware of the snakes now placed in the genus Cerberus through a drawing by Patrick Russell in his 1796, two volume, An Account of Indian Serpents, collected on the Coast of Coromandel. Russell applied the local Telugu name to the snake, the bockadam. Cerberus has a long and debris-filled nomenclatural history. This is highlighted by the fact that 16 species of Cerberus have been described since 1799, with at least 44 combinations of names applied to species within the genus. Gyi’s (1970) review of the homalopsids recognized three species, one of which had two subspecies. Cogger et al. (1983) placed Homalopsis australis Gray in the synonymy of Hydrus rynchops Schneider and reduced the number of recognized species to two. 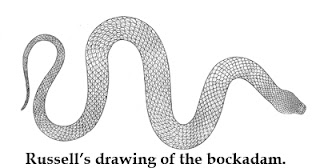 Alfaro et al. (2004) analyzed 2338 mtDNA bp from 21 localities and recovered five clades of Cerberus: a South Asia clade (India and Myanmar), a Greater Sunda Island-Sulawesi clade, a Thai-Malay Peninsula, Gulf of Thailand clade, a Philippine clade that included C. microlepis, and an Australopapuan clade, that is quite divergent (0.06 – 0.12) from the Asian clades (the Asian clades are 0.02–0.06 divergent from each other).

In an examination of 22 homalopsid species using three mitochondrial and one nuclear genes, Alfaro et al. (2008) recovered Cerberus as monophyletic. Using Markov Chain Constant Rates (MCCR) to test the times of divergence Cerberus appears to have separated from its sister the puff-faced water snakes of the genus Homalopsis about 14 MYA, while the Asian Cerberus clade diverged from the Australopapuan clade about 3 MYA.
Murphy, Voris, and Karns (2012) have now reviewed the nomenclature of the genus and define species based upon morphology and previously published molecular evidence. Three species have been recognized by recent workers, this paper recognizes five species: a South Asian C. rynchops (Schneider 1799); the Southeast Asian-Philippine C. schneiderii (Schlegel 1837); the freshwater Philippine endemic C. microlepis Boulenger 1896; the Australopapuan C. australis (Gray 1842); and C. dunsoni a new species from Micronesia. They also select a lectotype for Homalopsis schneiderii Schlegel based upon a figure published in 1837 and restrict the type locality for this species to Timor. They also discuss the evidence for a population of Cerberus australis in Indonesia, west of Weber’s Line.