Suizo Report -- Godzilla and her pups

Sorry that it has been such a long time since I've written all you little people in my life. What with being president of the Tucson Herp Society, running a machine shop, and carrying the full brunt of organizing a radio telemetry study, I don't even have time to pick my nose any more. You want to see? Take a peek up either nostril. Nothin' but nose hairs with crusty booger stalactites clinging to them. A veritable hairy booger garden.

First off, the news is that John Slone found a snake on our plot. Don't bother congratulating him, as he as full of himself as he can be of late. If he were any more modest about it all, he'd be insufferable. Marty Feldner was with him when this snake was found. This made Marty an accessory to John's find, and he also has bit of afterglow going on about it all. When they handed me the bag, they also handed me an excuse as to why they didn't finish their side of the plot. They ran into what they called "an interloper." The snake in the bag was the interloper, and indeed, when a snake is captured in the proper fashion in the framework of the Suizo Mountain Project, it becomes an interloper. It's hard to write up old friends when new friends keep interloping.

John and Marty also possess some psychic prowess. As further explanation tumbled forth from their gullets about the interloper in the bag, they went on to
say it was a black-tailed rattlesnake, it was a female, and it was quite pregnant. Much later, the following morning, as I prepared, sanitized, and quarantined
the container, I realized how much their interloper intertwined with my life. However, as soon as our new molossus was dumped out of bag and into its sterile environs, I also grew psychic. It was indeed a molossus, it was indeed a female, and it was so pregnant that a gentle squeeze to the flanks would certainly jettison piles of baby rattlesnakes and the accompanying ooze that encapsulates them.

The first thought was "get a transmitter in her and get her back in the game." This was my big chance to actually nail some wild birthing behavior on the part of molossus. With this in mind, a drive to a favored DVM in Tempe transpired. The good Dr. DeNardo took one look at that snake and said "NO WAY." The normally fearless vet saw the hopelessness of the situation. There was no choice but to let nature take its course--at my house.

On 25 July, between the hours of 0700 and 1800, our girl dropped eight kids. Typing boy got excited, and started shooting images like a Colorado schoolboy.
But the newspaper background left something to be desired. Typing boy next bagged all the snakes, and filled the container with a substance best described as dusty yard dirt. The ambiance of this all natural enclosure required a hide box, and a convenient black plastic box swiped from Gordon Schuett was selected in order to assure that any photographs were doomed to fail. A whirlwind of photography then ensued, the results of which were highlighted when the little neonates crawled through the water dish and left dust streaks all over the enclosure. Tying boy then got wise, removed all the snakes from the container again, put my long-suffering wife Dianna to work making a sturdy cardboard hide box, and then pet store gravel and genuine Suizo rocks were added. (Some choice language was directed at my "can't-leave-a-snake-on-the-ground-companions" during this process).

The positive evolution of the container will be noted in the images that follow, but I'm sure that any photographers in this group (all of you!) will note that there is still room for improvement. This improvement will transpire as soon as these little bastards all shed. Then, we'll bag everybody up again, sterilize the container again, further cussing at Slone and Feldner will transpire, prickly pear cactus will be chopped off my yard plants, the nearest Neotomamidden will be picked clean, and some GENUINE nature faking will transpire.

It's time to go to images.

Image 1: Godzilla in situ. I wonder how Slone and Feldner knew she was pregnant? 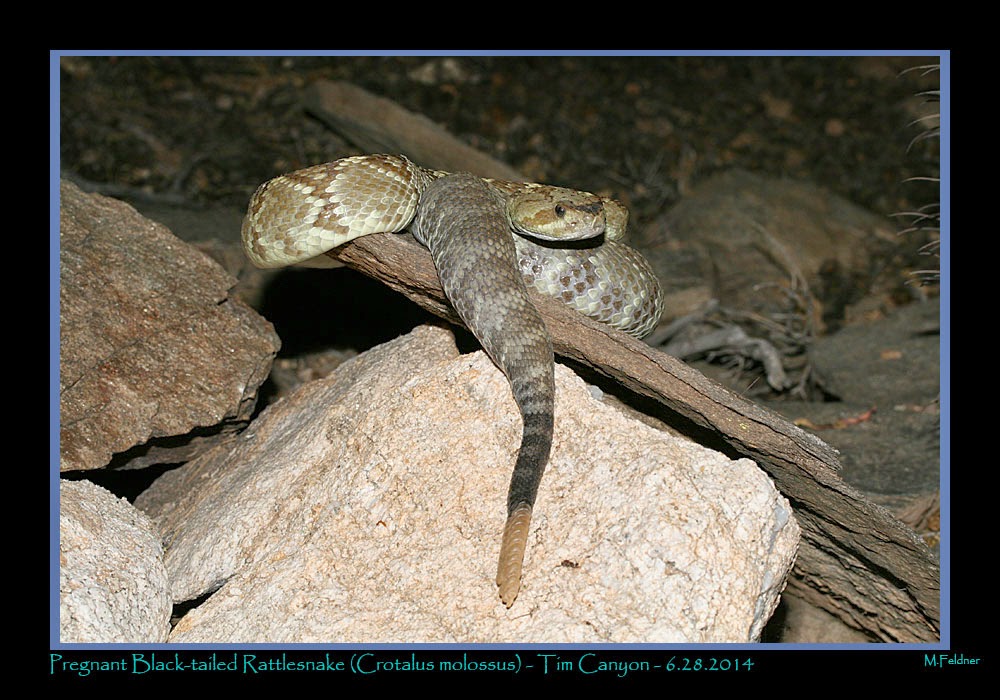 And how did Godzilla get her name?

Image 2: Note the ventral scales on this snake. Kind of looks like Godzilla is trying to break out, doesn't it? 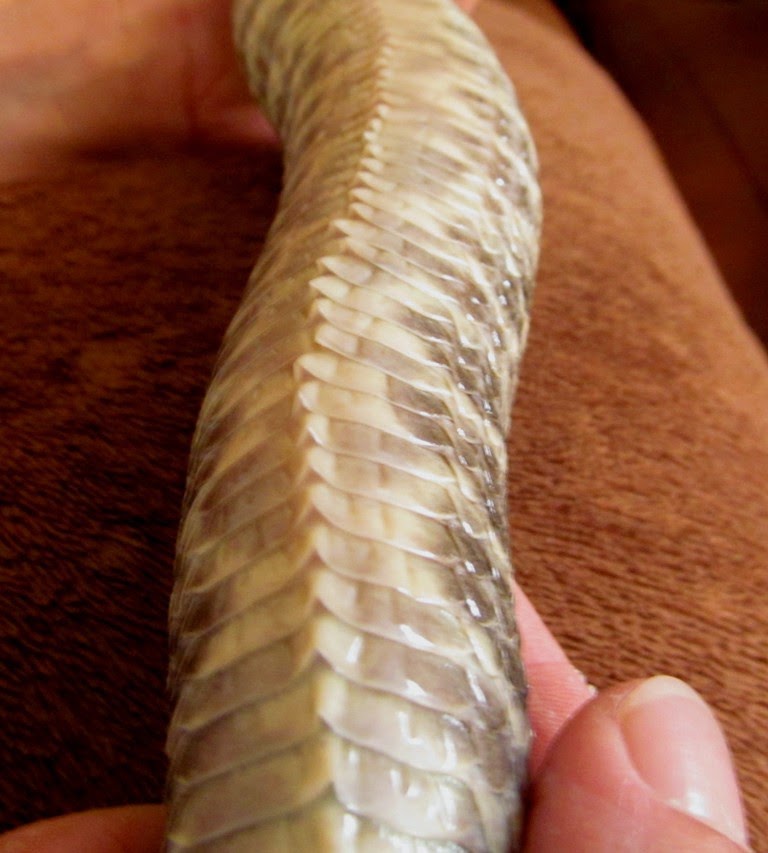 All the rest: Have a little mercy on the photographer. It would sure be nice if these neonatess were pretty. They aren't. They are ugly little olive drab turds. They fell out of the ugly tree and hit every branch on the way down. Never-the-less, they ARE molossus. And I may never get another opportunity like this again. We can hope that when these little bastards finally shed, they look nicer for the final shoot. Nature faking is best when the snakes are pretty. 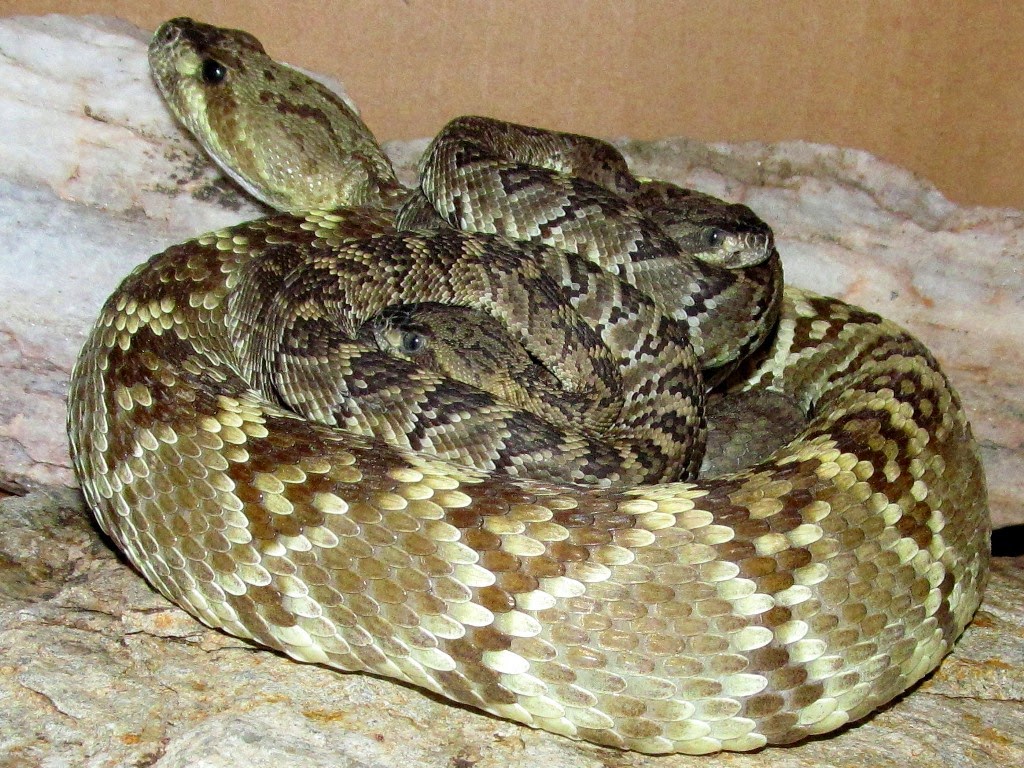 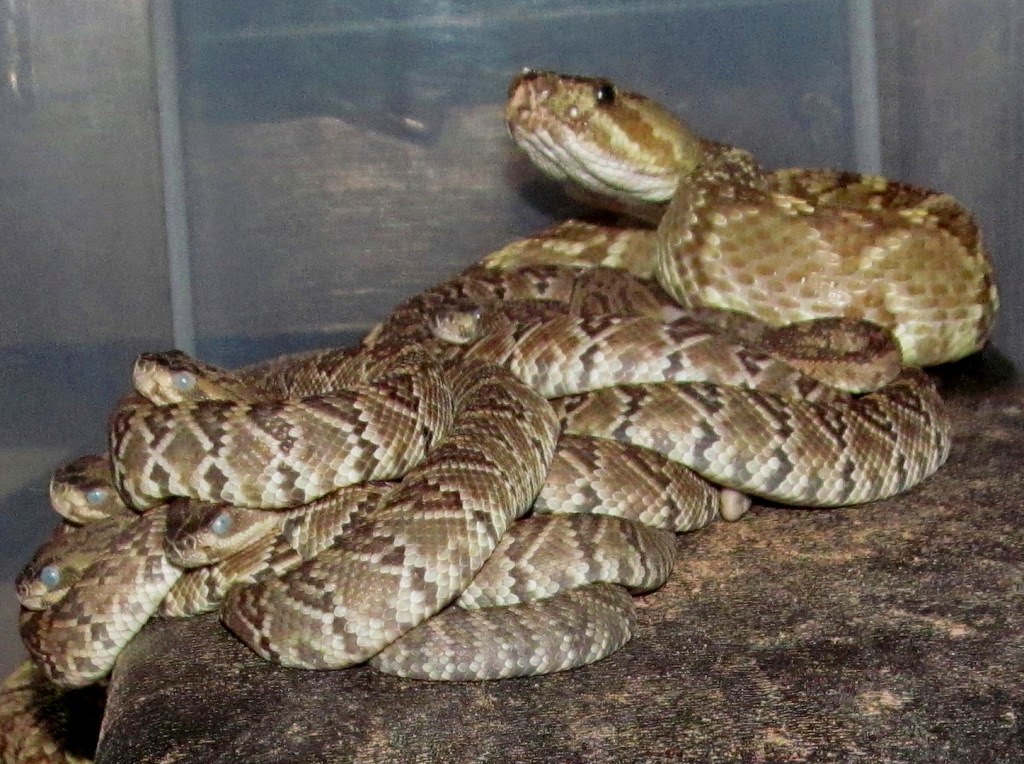 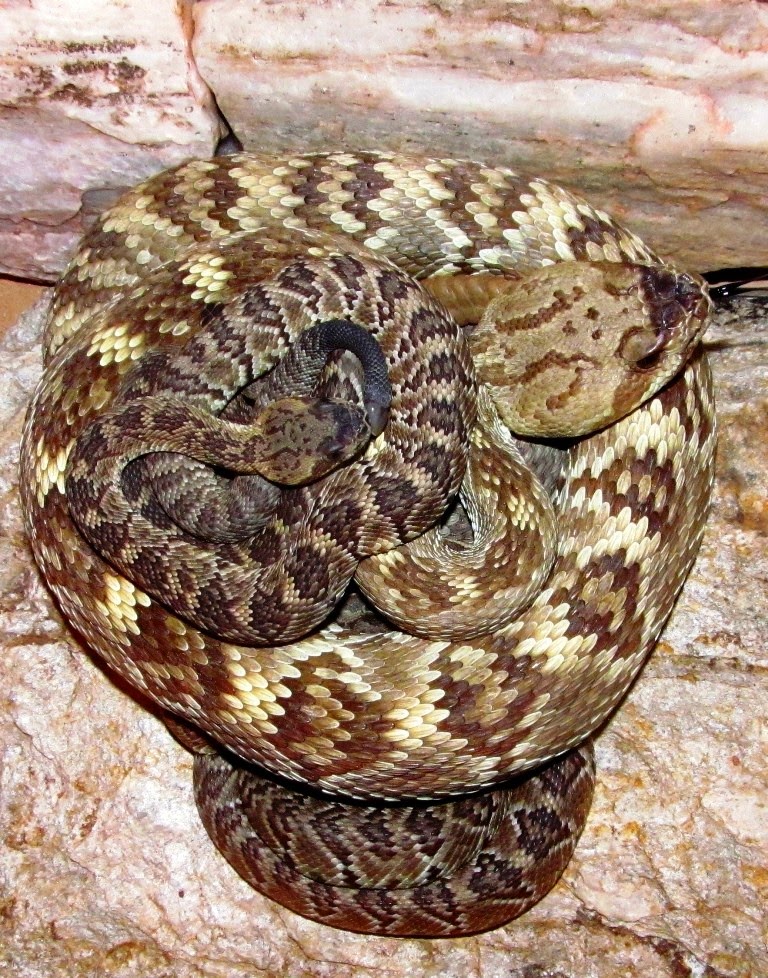 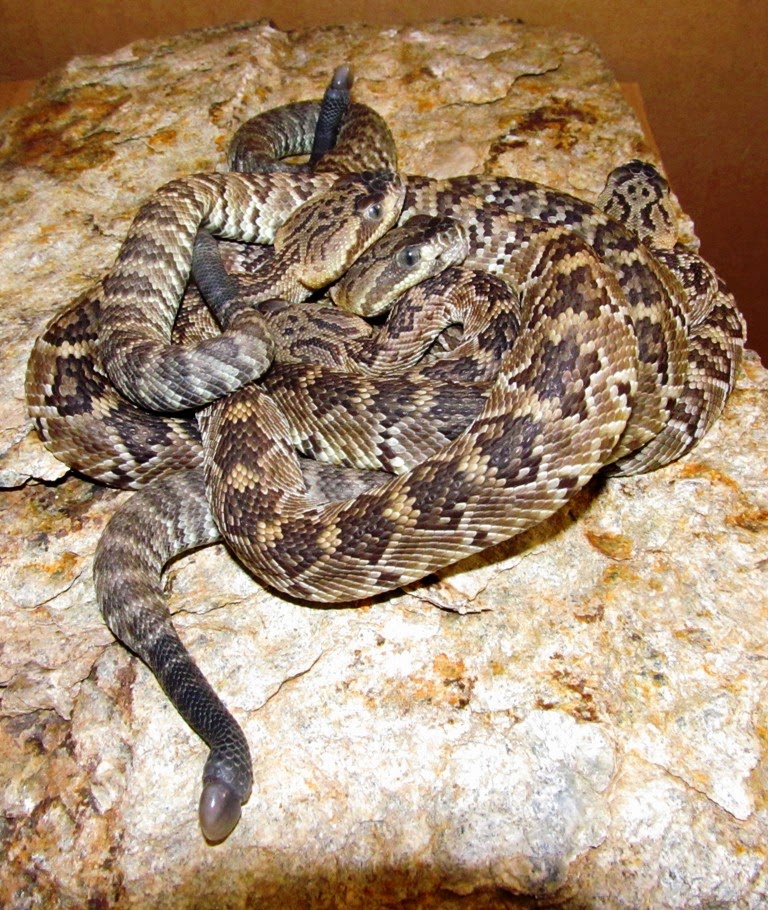 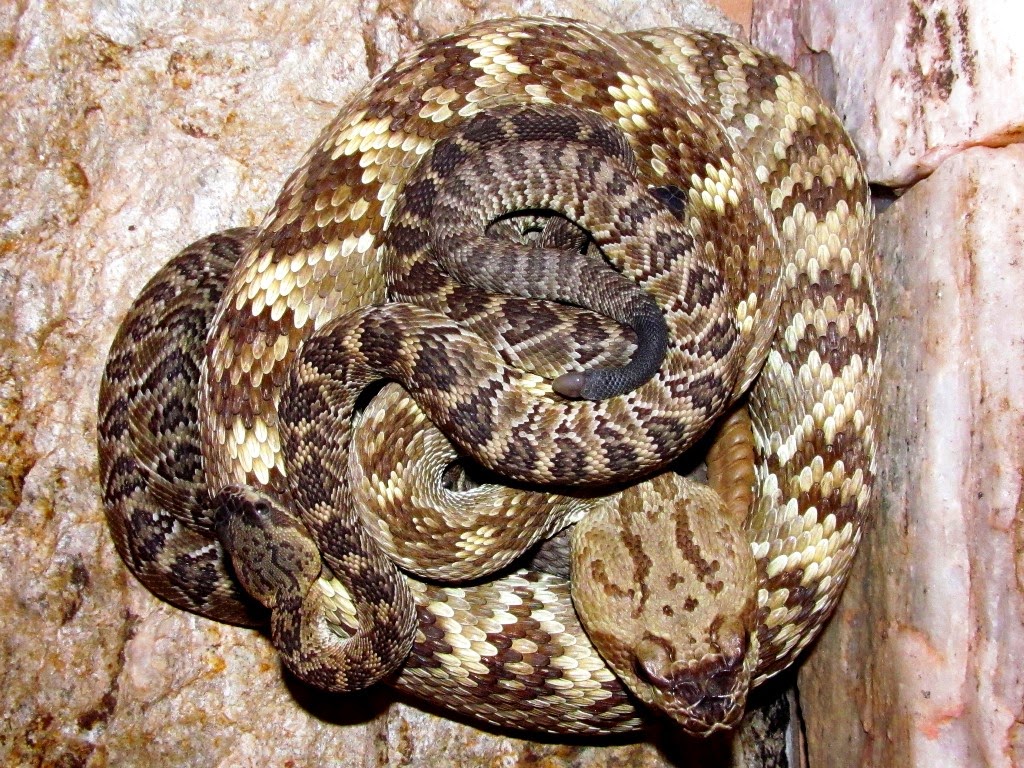 Until then, this here is Roger Repp, signing off from Southern Arizona, where the turtles are strong, the snakes are handsome(?), and the lizards are all above average.