Bushmaster - a preview of a forthcoming book 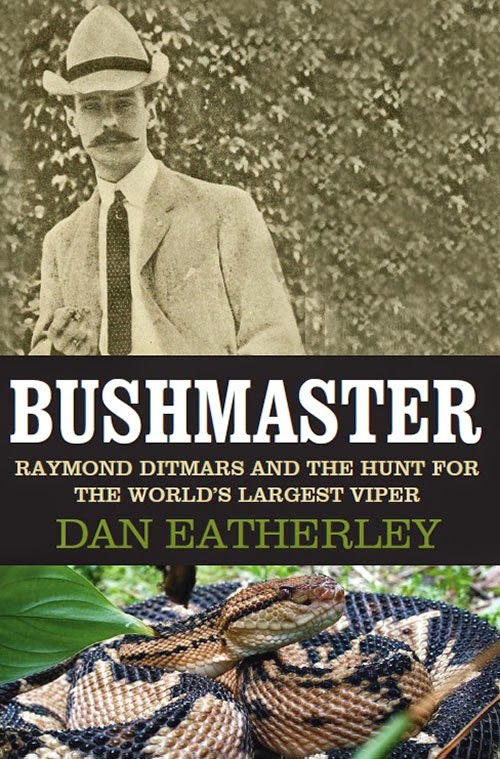 Bushmaster - due out on June 2, 2015 - is the story of one man’s obsession with an enigmatic and deadly reptile. Raymond Ditmars (1876-1942), the first curator of reptiles at New York’s world-famous Bronx Zoo, popularised cold-blooded animals as never before. His love for snakes, insects and other misunderstood creatures was conveyed in books, lectures, and pioneering motion pictures. But his expeditions to the South America jungles during the 1930s in search of the legendary bushmaster – the world’s largest viper – really captured the public imagination. In Bushmaster the author, Dan Eatherley, follows in Ditmars’s footsteps and attempts to achieve what Ditmars himself failed to do: find a bushmaster in the wild. Eighty years on, will Dan have any more luck? And will a bushmaster find him first?

Dan Eatherley is a British naturalist, writer and wildlife film-maker with a first class zoology degree from Oxford University. Dan has made a variety of natural history TV documentaries for the BBC, National Geographic, and the Discovery Channel, including credits as an assistant producer on two BBC series hosted by Sir David Attenborough: Life of Mammals and Planet Earth. He has filmed on location in swamps, deserts and jungles around the world. He has written over 100 articles on science and environmental issues for New Scientist, Scientific American and BBC Wildlife magazines. These days, when not hunting giant vipers, he works from his home in southwest England as a consultant in environmental sustainability.

Some advance reviews for Bushmaster:

“Bushmaster is a skillful work that combines the author’s own journey of discovery while shadowing the footsteps of one of the world’s most celebrated herpetologists and early pioneers for the conservation of reptiles with a fascinating history of the early evolution and modernization of the Bronx Zoo and herpetology in general.” —Austin Stevens, herpetologist, author, and adventure wildlife filmmaker

"There is perhaps no snake that so captures the imagination as the bushmaster, creature of myth, a real life dragon in serpent form. This quest to find one in the wild is a personal odyssey driven by fascination, and an intriguing read for any herpetologically minded wildlife fiends." —Steve Backshall, naturalist, writer, television presenter

"The world's greatest snakehunter, his quest for a legendary serpent, and a modernBoy's Own adventure, three stories elegantly intertwined in Bushmaster. Beautifully written and meticulously researched, I'm sure like me you won't be able to put it down." —Nigel Marven, television presenter

“A considerable number of persons can trace their interest in herpetology to days reading the many books by Raymond L. Ditmars. Those of us who have worked with bushmasters feel fortunate to have had this wonderful opportunity. Dan Eatherley has captured their essence and the nexus with Ditmars—unearthing a plethora of new information about one of our famous and most productive herpetologists.” —James B. Murphy, research associate zoologist, Division of Amphibians & Reptiles, Smithsonian National Museum of Natural History

“When I was a mere stripling my mother bought me Snakes of the World by Raymond L. Ditmars. My innate fascination for snakes soared to the skies with this book. But I never did realize what an incredible character Ditmars was. InBushmaster Dan Eatherley brings to life this enigmatic hero to uncounted, obsessed herpers.” —Romulus Whitaker, herpetologist, conservationist, and filmmaker

The book can be ordered early on Amazon .

The prologue to Bushmaster: Raymond Ditmars and the Hunt for the World’s Largest Viper

JUST LIKE A COFFIN. Five feet long, three feet wide, and three feet high, the wooden box dominates the landing.
“The expressmen must have had some job getting it up here,” muses the nineteen-year-old. According to the delivery note, the sender is a “Mr. R. R. Mole, Port-of-Spain.” After three months the consignment finally showed up at port yesterday aboard the SS Irrawaddy of the Trini­dad line, and just a few hours ago the crate was delivered by horse and cart to the large brownstone house on Bathgate Avenue. Dinner seemed to take forever but now it’s over. Insisting that his parents remain two sto­ries below, the young man can at last get to work with hammer and pry bar. He ignores the intermittent buzzes coming from the room adjacent to the landing. Forcing off the lid, he prepares for the draught of fetid air, a sure sign of a dead specimen, but is relieved to detect only a faint nutty odor. Under several inches of brittle straw lie various large burlap sacks, each knotted and labeled. Turning over a tag, he shudders as two words are revealed in a neat script.
Lachesis muta
The sack expands and contracts in response to the breathing of its contents whose rough scales press a distinctive pattern against the fabric.
Like the surface of a pine cone, he thinks.
“Everything all right up there, Ray?” his mother’s voice disturbs the youth’s reverie.
“Fine. Don’t anybody come up!” He needs to get a move on.
Heart pounding, the teenager grasps the bag above the knot and lifts it from the crate. It’s disappointingly light given that Mole’s note describes an animal of “about eight feet long.” Books and articles had led him to expect a specimen of that length to be far heavier. Holding the sack away from his body, he enters a small adjoining room via a door fitted with strong springs. Glass-fronted cages are arranged in two tiers along one wall. Above them stretches the desiccated skin of a large snake, a python maybe.
The buzzing, emanating from one of the upper cages, intensifies. The teenager places the sack in a large empty cage on the lower tier and loosens the knot. He reaches for a broom handle; attached to one end is a piece of stiff wire twisted like a shepherd’s crook. Using this, he inverts and raises the bag, hoping to coax out its tenant from a safe distance, but the animal is not cooperating and instead braces itself against the cloth, defying gravity. The beast does at least offer up a glimpse of alternating salmon-pink and jet-black markings. Impatient to see more, the young man whips away the sack with his hand, spilling the creature out into the cage.
He would never forget the turmoil of impressions etched on his brain in that instant: the snake’s length far exceeding that suggested by its weight; the keeled scales lending the skin a rasp-like quality; the waxy sheen of the animal; the blunt head; and, set above pinkish jowls, the red­dish-brown eyes with their elliptical black pupils. In the moments these features take to register, the front half of the reptile’s body rises to form a huge “S” while the glistening pink tongue forks at the air.
Then the snake advances.
In horror the teenager backs away, knocking over a chair.
The reptile follows.
Never has he encountered a viper actually prepared to pursue him. In his experience, even the most venomous of snakes are cowards and, unless cornered, flee at the first sign of trouble. With the staff he tries ever more forcefully to check the giant reptile’s progress, attempting to lift and push it back, but the limbless body of his adversary slides over the hook like jelly. The snake is between him and the door, cutting off any hope of escape. The buzzing is now an uninterrupted, deafening drone.
Downstairs his mother drops her knitting. “That was definitely a crash I just heard, John.”
“Relax, my dear. Ray seems to know what he’s doing,” responds her husband with little conviction. They both glance nervously at the ceiling.
And still the serpent advances.
The inch-long fangs and excessive amounts of venom for which this species is notorious dominate the young man’s thoughts. Can this snake know its own power? Can that dancing tongue taste his fear?
The teenager has almost nowhere left to go when, in his peripheral vision, he notices a broom. He flicks it behind him with the crook of his staff. Retreating another step, in one motion he grabs the implement and shoves the bristles sharply into the face of his pursuer. The snake pauses, pulls its body into a tight coil and beats out a rhythm against the floor with the strange horny tip of its tail. The youth catches his breath. Saved!
Broom in hand and more confident, he advances on the reptile. Sev­eral additional firm jabs encourage the serpent to turn and creep toward the cage. The teenager gently raises the snake’s chin with his staff ena­bling the viper to glide into its new quarters. He slams shut the glass door to the cage and slumps to the floor, gasping and prickled by sweat.
Now for the boas.
Editor's note. Dan Eatherley spent sometime with me in Trinidad searching for bushmasters. To find out the results of his quest you will need to read the book. JCM