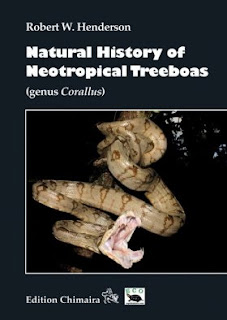 "Robert W. Henderson has conducted research on Neotropical treeboas for nearly 25 years, elucidating aspects of their natural history and monitoring changes in populations over time, emphasizing in particular how these snakes have adjusted in light of human-mediated changes to their habitat, prey base, and predators. In this book, Henderson provides insights into habitat, activity, diet and foraging, predators and defense, and reproduction, with each chapter providing insights, a large percentage of them firsthand, into what we know about these intriguing snakes. I take great pride in seeing a boa before Bob does (it happens rarely), but then he has undoubtedly encountered more treeboas in their natural habitat than anyone."
– Robert Powell