New skulls and skeletons of the Cretaceous legged snake Najash 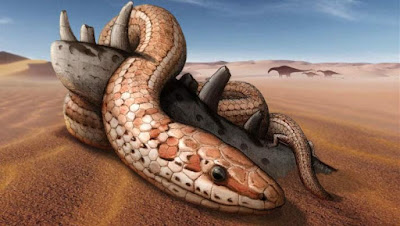 Najash is an extinct genus of basal snakes from the Late Cretaceous (Candeleros Formation) of Patagonia. Some modern snakes retain traces of hind legs - boas, pythons, leptotyphlopids, and others. Some Cretaceous snakes also had hindlimbs or remnant hindlimbs, but Najash is unusual in having well-developed legs that extend outside the rib cage as well as a pelvis connected to the vertebral column. Fossil Najash was first found by Sebastián Apesteguía at the Argentine Museum of Natural History and his team in a terrestrial deposit in the Río Negro province of northern Patagonia, Argentina, in 2003 (Apesteguía and Zaher, 2006). The fossils date to roughly 90 million years ago. The skull and vertebral of Najash show primitive features that resemble other Cretaceous snakes, such as Dinilysia and Madtsoiidae. Additionally, several characteristics of the anterior body and tail of Najash and Dinilysia show how the body plan of snakes evolved from a lizard-like ancestor. Najash retained its sacrum (a pelvic bone composed of several fused vertebrae) and its pelvic girdle, which are absent in modern snakes and all other known fossil snakes. Phylogenetic analyses place Najash as an early snake lineage outside of all living snakes.

Now a new report on Najash (Garberoglio et al. 2019) based upon eight new skulls and three articulated postcrania of the Cenomanian legged snake Najash from Patagonia, Argentina. The genus was previously known from one articulated partial postcranial skeleton and a partial cranium and associated fragments. The new skull specimens include a new and a near-perfectly preserved three-dimensional skull that, by itself, clarifies several long-standing problems on the origin of key features of the modern snake skull. These new Najash specimens reveal a mosaic of primitive lizard-like features such as a large triradiate jugal and absence of the crista circumfenestralis, derived snake features such as the absence of the postorbital, as well as intermediate conditions such as a vertically oriented quadrate. The new cranial data also robustly resolve the phylogenetic position of this crucial snake taxon, along with other limbed snakes.

The four-legged ancestors of snakes have not been found. The new study suggests that those mysterious proto-snakes probably lost their forelimbs early in snake evolution, at least 170 million years ago. But the back legs stuck around for tens of millions of years.

That means that hind-legged snakes, such as the Najash group, did not represent a short-lived evolutionary phase. Instead, snakes retaining their rear legs was a successful body plan that survived for eons until most snakes transitioned into fully limbless squamates during the last half of the Cretaceous.